The Lives of Tao by Wes Chu 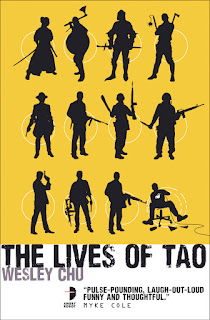 I'll bet that Wes Chu's life motto isn't YOLO ("You Only Live Once"). In The Lives of Tao, the title character is a very old, somewhat snarky alien who has been stranded on earth for generations. Tao and his fellow aliens crash landed here many years ago and they can only survive in host bodies. When the host dies, they must move on and Tao has moved on many, many times.

The book opens with a bang, literally, as Tao and his host are in a spy-vs-spy caper that goes wrong. Bullets are flying and Edward, Tao's host, makes the ultimate sacrifice in a dive off the John Hancock building. Edward's body doesn't survive, but Tao lives on.

Tao doesn't have time to be too picky in selecting a new host and he settles into the body of Roen, an overweight, not overly ambitious IT technician. Now Roen has a voice in his head and a world of trouble headed his way.

The Lives of Tao is a fun romp. Combining the action of a James Bond movie with a secret history of the world worthy of it's own subdivision of the X-files, Tao and a cast of aliens and humans work to whip Roen into the shape he'll need in his new role as soldier/secret agent/spy. Because, you see, there are two factions of aliens and they're at war.

In a way, The Lives of Tao, is kind of the ultimate self-improvement book. Roen has to get fit or die. There's a lot he has to learn. Tao may live forever, but Roen's survival is always in doubt. In a way Wes Chu might have done too good a job in casting Roen as a hapless every man, I found the other characters, especially Tao, more compelling. But Roen improves as the book goes on and I found myself rooting for him.

The hidden history that gets revealed in The Lives of Tao is clever and sometimes teasingly referenced. The book doesn't get bogged down in heavy details, it blasts along as an adventure, the kind of thing that would make a fun summer movie, the kind that leaves the door open to host of sequels. I have no idea if The Lives of Tao will ever be seen on a movie screen (it should!) but that sequel book is already in the works.

There's no need to YOLO. You can have more fun and action than can fit in one life. The Lives of Tao is a complete story with heroes and villains, life and love and non-stop action. But Wes Chu has more to tell us about The Lives of Tao and that's a good thing.

Posted by Kent Peterson at 3:26 AM

I participate in the Amazon Services LLC Associates Program, a program designed to provide a means for sites to earn advertising commissions by linking to Amazon. Any recommendations I make on this site are things I'd truly recommend to a friend. Items purchased on Amazon within 24 hours of following one of the Amazon links generate the revenue that keeps this site going. So thank you for your support.